Born in Dunbartonshire, David Smith was educated at various colleges in Glasgow including Glasgow School of Art and the Glasgow Print Studio.  Inspired by the Scottish coastal scenes and the fishing villages of the East Coast of Scotland, David has been the recipient of a number of awards including the prestigious David Cargill prize at the Royal Glasgow Institute. He is a member and current President of the Glasgow Group of Artists and was elected an RSW in 2011. His works are held in the collections of the Glasgow Caledonian University and House of Lords, London. 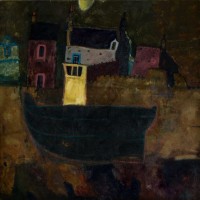