Born in Stockholm he studied at the Technical School in 1901, at Althins’ Painting School 1902 to 1904, under Gunnar Hallström from 1904 to 1905, and at the Matisse Academy in 1908. He was a student at the Art Academy in Duesseldorf in 1905 and at the Artists’ League school in Stockholm 1906 to 1908. He belonged to the same generation as the modernist ‘Men of 1909’ group. Along with Torsten Palm and Smeddsud colourists, he stands as a leading exponent of so-called intimate realism. He lived a great part of the year in Vickleby and became a central figure in the artists’ colony known as the Vickleby School. His work is largely influenced by the land scape of Öland and its idyllic villages. His work is in the National Museum in Stockholm. 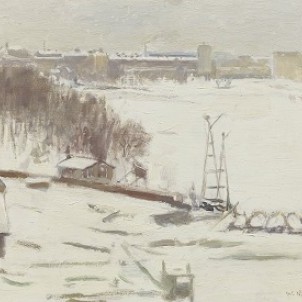